Behind The Music of Shambhu: A ‘Soothe’ Moment in a Hectic World.

Pilgrimage of the Heart Yoga > Meditation & Mindfulness > Behind The Music of Shambhu: A ‘Soothe’ Moment in a Hectic World.

“We are the music-makers, and we are the dreamers of dreams,”

—from Ode by Arthur O’Shaughnessy

“You will hear everything from jazz to instrumental folk to breezy pop to world fusion and even a hint of new age on Soothe, and it all goes down silky smooth.”

Music has the power to transform our lives and hence the world.

As I drove to work the other day my mind was spinning with all the things that were going wrong with a remodel of my new yoga studio. It was not the way I wanted to start my day. I knew just the antidote: turn on some heartfelt, relaxing music and center myself in my breathing. I chose the new album Soothe by Shambhu and it did the trick!

Reviewer Bill Binkelman from Zone Music Reporter describes the music: “Soulfulness runs throughout each track on Soothe like a slow, lazy brook winding its way through a forest, at times burbling over rocks, and other times flowing serenely with sunlight shimmering off the gently rippling surface.”

Soothe not only uplifted my own spirit but I started using Shambhu’s music as a peaceful backdrop for the yoga classes that I teach. Then I got curious about how Shambhu was able to convey a feeling of calm serenity in his music.

Shambhu’s adult life has been rooted in spirit. He discovered meditation in college and over time he was inspired to transform his rock style into a serene, instrumental flow that Feng Shui Mommy blogger Bailey Gaddis described as ‘mind medicine’.

“I was jamming with musicians in New York when I met drummer Narada Michael Walden. He had just connected with meditation guru Sri Chinmoy and his students – guitarists John McLaughlin and Carlos Santana. Narada invited me to meet his teacher and learn meditation.  Sri Chinmoy saw music as inspiration, not entertainment, and he encouraged music as a soulful  expression of meditation. 18 months later I joined and found myself jamming with Carlos who played a quiet and expressive guitar music. When he played, listeners had their eyes closed, they explored the music inside the silence, and the music expressed a calmness. When we played acoustic guitars as a duo, I could feel my soulful heart. I loved it, and I later brought that experience into my own music.”

“My music is ideal if you want to unwind and clear the mind. While recording my albums, I dive into my own silence so the music embodies a calm, clear, and beautiful feeling – like a vacation in sound.”

Soothe features many great instrumentalists who create a symphony of calming sound, with Shambhu at the helm on acoustic and electric guitars. Musicians include Michael Manring on bass, Jeff Haynes on percussion, Frank Martin on piano, Paul McCandless on reeds, Premik Russell Tubbs on soprano sax and wind synth, George Brooks on soprano sax, Ravichandra Kulur on bansuri flute, Kristin Hoffmann on vocals, Todd Boston on steel guitar, and Gurumurthy V on tabla.

Shambhu’s music invites the listener to participate in a dream for a better world, which will be created by individuals striving for their own betterment. His music is a pathway of sound into the ocean of love that each of us has within. His message is one of peace and the potential of each of us to reach into the realm of heart and soul.

And that brings me back to music makers and their effect on the world. I quoted from Ode by Arthur O’Shaughnessy at the beginning of this writing. Further along in his poem, written in 1888, he writes:

“For each age is a dream that is dying, Or one that is coming to birth.”

If you are local to the San Diego area, join us on Tuesday September 26th, 2017 from 7:45-8:30p, where Shambhu will be accompanying Sujantra’s meditation class. Pilgrimage Yoga offers free weekly meditations at both of its San Diego locations, suitable for practitioners of all levels. Join us for music and meditation!

Visit ShambhuMusic.com to listen and buy! Download the title track from ‘Soothe’ for free at soothecd.com. 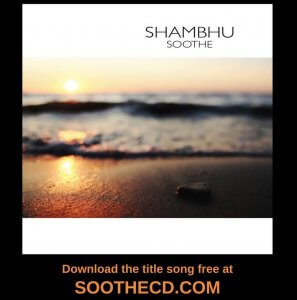