Pilgrimage of the Heart Yoga > Philosophy > From the Founder

“We must celebrate the satisfaction-ecstasy of the oneness-heart.”
–Sri Chinmoy 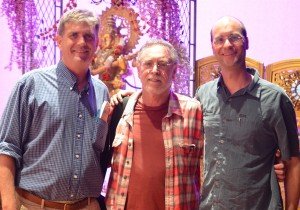 On April 15th I had the good fortune to help produce a free concert in New York honoring the 50th anniversary of Sri Chinmoy’s coming to the West. The concert featured students of Sri Chinmoy performing his music and renowned performers Krishna Das and Russian folk legend Puroshottama Boris Grebenshikov offering their soulful compositions.

The evening was a celebration of the joy that comes when people form different backgrounds and traditions come together to celebrate that which unites rather than that which divides.

The first part of the concert featured the music of Sri Chinmoy arranged by composer Sahadeva of London. After an intermission and film about Sri Chinmoy www.srichinmoy.org, Krishna Das played three songs. Boris Grebechikov, a Russian folk legend who was recently featured in the New York Times played a few of traditional pieces. He and Krishna Das together performed ‘Saraswati,’ his composition which appears on Krishna Das’ recent album. In the Hindu pantheon Saraswati is the embodiment of windom, learning and the arts.

The concert was part of the Songs of the Soul series, which is organized by students of Sri Chinmoy around the world. A gallery of pictures from the evening can be found by clicking HERE.