From the Founder: From Russia with Love

Pilgrimage of the Heart Yoga > Philosophy > From the Founder: From Russia with Love

From Russia with Love

In June of this year I did a meditation lecture tour in Scandinavia and Russia. I did a program called Let’s Meditate in Oslo, Norway; Helsinki, Finland; and St. Petersburg and Moscow, Russia. I had been to Scandinavia before but this was my first visit to Russia. I must admit I was a bit apprehensive about going to Russia based on the portrait that the 24 hours news cycle paints of Russia. 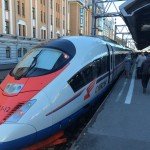 I arrived in St. Petersburg on a three-hour, 180 km/hr ultra modern train from Helsinki. All immigration formalities were handled on the train. I would describe St. Petersburg as a mix of Venice, Italy and Vienna, Austria. Peter the Great (1672-1725) set out to build a world-class city and he achieved his goal.

The city is built around the spot where the Neva River flows into the Baltic Sea. Tour boats course though the canals that ring the city.

Over 50 people attended the free meditation program in St. Petersburg, sponsored by the Sri Chinmoy Centres in Russia. The program took place in a large art gallery that was hosting a display of Sri Chinmoy’s Peace Bird drawings. The art gallery is on the ground floor of a massive seven-story building that was built in the 1930 to house over 100 artists and sculptors. The people that attended the program deal with the same daily stresses we do and had the same questions about meditation that I encounter in San Diego. It all seems to come down to an overly active mind and the challenges of living in the modern world. 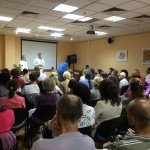 St. Petersburg I took a four-hour high speed train to Moscow, population 15 million, which I would describe as a blend of Washington D.C. and Mexico City. 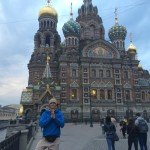 Red Square is the center of the tourist sights and is a mix of fairy tale architecture and the imposing red stone fortress of the Kremlin. The night in Moscow we had over 100 people attend the meditation program. A few of people made a point to come up to me afterwards and asked me to tell people in America that they wanted peace between our two nations.

Taking a walk on the sunny morning of my departure though a neighborhood much like one would find in Greenwich Village, New York, I was struck by the similarities among the vast majority of the planet’s citizens. Most people have no longing for world domination and war. People just want to have a descent place to live; they are willing to get up early and work hard in order to shelter and feed our families, and they have a strong desire to live in a peaceful, cooperative neighborhood surrounded by kind people.

Someday the consciousness of the yogis and meditators will guide the actions of governments and politicians. ‘Till then patience and persistence! 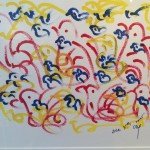