If you want to combine spiritual centering with unrestrained giddiness then I recommend Goat Yoga at Sugar Sweet Farm in Encinitas.  Once you get off the freeway, the serene and winding country roads begin to set the mood.  You’ll pass ranches, sprawling haciendas, and lots of eucalyptus trees. Once you arrive at the farm you are greeted and checked in by the charming Elizabeth Sugarman, proprietress.   A pebbled walkway leads you through orchards to the animal pen where goats of all sizes and breeds romp, eat and prance about (I so love the prancing!). A goat named Cowboy actually jumped up, in a single bound, atop a four-foot high fence to extend a bleating hello.

After a bit of animal socializing we walked over to the yoga “studio,” a re-purposed tennis court with umbrellas for shade, and bales of hay around the perimeter.  We set up our mats and were instructed to put all belongings that we didn’t want eaten, out of the way. The instructor was introduced and we seated ourselves in Sukhasana (seated cross-legged pose), closed our eyes and began the journey.  And then the goats came in. We were forewarned that these critters are curious and friendly, and not to hold back the laughter. There were about ten goats of various sizes and two very young ones that just joined the herd yesterday. The babies were passed around during the class for cuddling.  We were given instruction on how to hold them – one arm securing the chest and the other around the bum and keep them level. I didn’t want to let mine go. 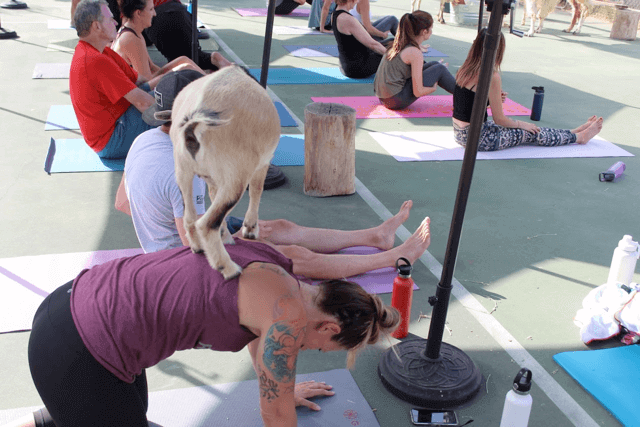 Once when I was supine preparing for cobra, I felt four little cloven hooves on my back.  It was Minty, an adorable black and white youngster with a garland of flowers around her neck.  Fake of course, or they would have been eaten. You can’t help but giggle. In downward facing dog, I came face-to-face with upward facing Dagmar.  There were buckets of grass around the studio for them to munch on but Gretel preferred a mat and Cowboy preferred a delicious knot on the back of someone’s yoga top.  The goats’ favorite pose was pigeon. It gave them a real opportunity hop aboard. There were 4 or 5 young girls who acted as goat wranglers and clean-up squad when nature called.

Periodically, sliced carrots were scattered around and the sound of stampeding hooves was hilarious.  In addition to the goats there were also a couple of llamas in the mix – Bon Bon and Tootsie. The farm also had horses, two sweet dogs, guinea pigs, and chickens. 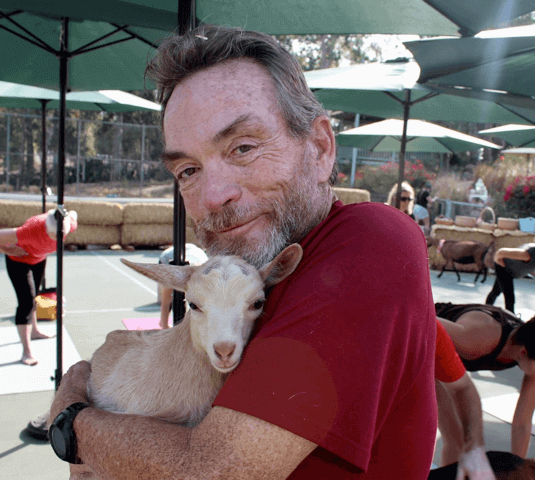 At the end of class as we relaxed in Shavasana, lavender scented wash towels were distributed, and I saw a red-tailed hawk flying overhead.  The instructor was a rock star for conducting a very novel yoga experience with a million distractions. 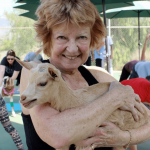 WRITTEN BY PATRICIA STALEY: “The harder I work, the luckier I get.”