How To Like Yoga: Stories From A Reluctant Yogi.

Pilgrimage of the Heart Yoga > Yoga > How To Like Yoga: Stories From A Reluctant Yogi.

I had always liked the idea of being a yogi but could never quite picture myself fitting into the peppy, Lululemon-clad hordes of Zen-seekers that I saw in perfect headstands as I passed by the windows of the many yoga studios in my neighborhood.

Everyone looked so flexible and intimidating, so I’d keep walking and do a few stretches in the morning on my own, wondering what it would be like to join in on yoga as a group experience.

So when I decided to spend a year working and traveling in New Zealand, I surprised myself by signing up for a month-long yoga teacher training course on the North Island. I told myself that this was my year to learn about the things I was interested in but had never tried — and that included yoga and meditation.

In addition to the many benefits of exploring a new culture, I looked forward to specifically dedicating time to pursue yoga and meditation with no excuses — no more saying, “I’ll do it later” or “maybe next month.” I knew about how stress affects our health, impacting circulation, anxiety, and weight, and knew I could benefit from some stress-relieving routines like a regular yoga practice.

I didn’t trust that I had the personal resolve or discipline to make myself develop a yoga practice on my own, so I hoped that the month-long intensive would make the habit stick so I would have an easier time continuing it when I returned home.

I was immediately drawn to the incense wafting between rooms, the bells of mindfulness tolling throughout the day, the brightly colored yoga mats splayed out on any and every surface big enough, and even the obtrusive sound of the harmonium that could be heard from across the grounds.

However, as an introvert who generally doesn’t like an audience, I was pretty apprehensive about the actual yoga teacher training thing because you’re training to be a yoga teacher, which, you know, inherently involves an audience.

But it turns out that group yoga is not as intimidating as I thought. Don’t get me wrong — I definitely considered escaping many, many times. The night before I had to lead my first yoga class in front of my peers, my partner had to talk me out of booking a taxi to get me out of there immediately.

And yet — everyone was very supportive along the way and often experiencing the same level of nervousness that I was. Everyone was more focused on what they were doing rather than looking at the person on the mat next to them. It seems obvious now, but this was such a road block for me to getting into yoga in the first place that it felt like quite a revelation once I figured it out.

As yoga, meditation, and kirtan became parts of my everyday existence, I couldn’t believe it had taken me so long to give these things a real try.

At first, when I learned we’d be doing kirtan every night, I experienced an unparalleled dread. Singing? In a group? No thanks, I’d rather poke my eyeballs with a hot stick. It’s funny how things work out, because kirtan ended up being my favorite part of the entire month — a place where I could let go and discover an unknown talent for drumming. Who knew?

Several years removed from this experience, I still incorporate things I learned during my yoga intensive month into my life, like when I’m feeling anxious at work or tight and sluggish from too much sitting. A quick and basic series of poses or a few minutes of regulated breathing exercises do wonders for my well-being, and I’ve been able to share these techniques with friends and family.

The benefits of yoga, from reducing stress to increasing compassion, greatly outweighed any discomfort I felt about plunging myself into the yoga world head first. You don’t need special clothes or an Aum tattoo or any certain level of flexibility to do yoga. As long as you do it for you and focus on your inner transformation instead of your outward appearance, you won’t be a reluctant yogi for long. 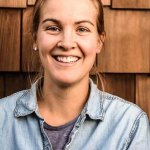 Lettie Stratton is a writer and urban farmer in Boise, ID. A Vermont native, she is a lover of travel, tea, bicycles, plants, cooperative board games, and the outdoors. She’s still waiting for a letter from Hogwarts.