Geologic time encompasses billions, perhaps trillions of years. Our universe began about fourteen billion years ago. It began! What was going on before it began? Theoretically, millions of universes have popped in and out of existence in what might be considered ‘moments’ in the grand scheme of eternity. So, fourteen billion years is a short period of manifestation considering the eternal nature of space. How does geologic time relate to us? What does it mean considering our brief period of ‘existence’?

To me, one of the greatest ideas concerning our universe stems from Einstein’s relativity theories. He discusses the idea of singularity. Everything about our manifest universe began from a point of Unity. This, to me is very significant in that it means the energy that coalesced in each of us began at that moment, the bang. Everything, that is, began together, in that moment.

I developed a mantra to meditate on about this idea: “Because I am a part of the Universe, by the definition of Unity, I always have been and always will be a part of this universe.”

Geologic time is fascinating to me. Consider that human civilizations have only been around a mere few thousand years by most reckoning; maybe ten thousand years at best. That’s just a blip in the grand scheme of things. But the energy that is manifest in you and me began at the bang. We’ve all transitioned through geologic time from the beginning. An atom of hydrogen from the center of some ancient, burned out sun could be the spark that awoke the consciousness in you. Thinking even further back, consider the bang. Einstein posits that the universe started as a singularity. Do we exist within an expanding black hole? And since we are expanding, what are we expanding into? Timeless, eternal, undifferentiated space?

Geologic time keeps me company when I consider the trivialities we tend to focus on. It reminds me of what is really important. It enables me to expand my focus and see the big picture (pun). I find peace in this idea of eternity. It points to both the importance and the insignificance of moments. As I have said before, the only thing that truly matters in the entire universe is what is writ on our own personal ledgers. Our ledgers are eternal. Are our entries written in black, or red, or do we write in the purity of light? Fifty thousand years from now, a million years… a billion… trillion… everything will have transitioned, nothing will have mattered… except to you, your spirit, your spark. 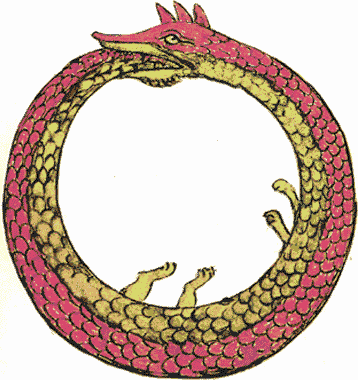 In Kirtan, as in our yoga practices here at Pilgrimage of the Heart, we begin and end by chanting the syllable, OM. Throughout the ages OM has been regarded as the universal vibration, permeating through everything; the vibration by which all other vibrations emanate. This has been substantiated by the discovery in the 50’s of the Cosmic Microwave Background Radiation. It was discovered that this radiation is found in every corner of the observable universe, with no apparent source and it began literally at the Big Bang. The universe is an eternal chant and when we participate we align ourselves with its eternal spark. We glimpse eternity and perhaps are illuminated as to our one, universal task.

Pilgrimage of the Heart offers several meditation classes, Pranayama (breath practice) and Kirtan (chanting/meditation set to music) each week. Check the schedule for days and times.