THE SAGES OF YOGA: VISHVAMITRASANA – PERSEVERANCE BY JAMIE MARTIN

Pilgrimage of the Heart Yoga > Yoga > THE SAGES OF YOGA: VISHVAMITRASANA – PERSEVERANCE BY JAMIE MARTIN 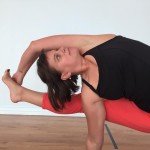 Despite King Vishvamitra’s great strength, Vasistha easily defeated him with his mystical powers. The king realized that the sage’s strength was far greater than that of a mere warrior. Vishvamitra decided to renounce his kingdom and become a great sage himself through the practice of yoga.

The yogi Vishvamitra was known for his bad temper, causing him to lose the yogic powers he had obtained through much hard work and practice. He constantly became distracted but always resumed his meditation when he became aware of his shortcomings. Ultimately, the yogi Vishvamitra became the sage Vishvamitra and he embodied all the qualities of sage: patience, forgiveness, and compassion. Even Vasistha came to respect him.

Vishvamitra’s journey shows that progress in life comes through trial and error and that persistence will lead to success. The pose dedicated to Vishvamitra is a twist, standing pose, hip opener, and arm balance all in one! Because Vishvamitra’s spiritual path, or sadhana, was a challenging one, so is his pose. This asana reminds us that yoga isn’t always an easy path, but certainly one worth pursuing with perseverance and dedication.