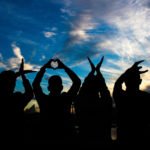 The moral and ethical foundation of yoga is rooted in truthfulness, non-harming, compassion, and empathy. At the heart of these teachings is a core respect for the tremendous value of each human life. Bringing this into play in our own lives is a worthwhile challenge.

The next step is to value the lives of others, not only those we know but people we shall never meet. Not only those now alive but future generations. Feeling empathy for an ever-widening expanse of humanity allows your awareness and consciousness to expand without limits. This experience begins with an awakening of our spiritual hearts.

The next challenge is to manifest this in the world: to create laws and institutions that value and respect each human life. A big step forward was taken in 1948 when the Universal Declaration of Human Rights (UDHR) was adopted by the United Nations General Assembly. This declaration was created to complement the United Nations Charter by creating a road map to guarantee the rights of every individual on the planet.

The Commission on Human Rights, which was tasked with the creation of the UDHR, was made up of 18 members from various political, cultural and religious backgrounds. Eleanor Roosevelt, the widow of American President Franklin D. Roosevelt, chaired the drafting committee.

The preamble calls for: “…the advent of a world in which human beings shall enjoy freedom of speech and belief and freedom from fear and want…” This brings us back to the essence of yoga.

The practice of yoga creates clarity and compassion in the mind and heart of the yogi. The challenge then becomes to share that clarity with others. I recently wrote an article in the Huffington Post exploring yoga and the UDHR and its relevance in current challenges and concerns our nation faces.

Each time you practice yoga, know that you are taking one step towards a better world. The next step is what you choose to do as you leave the mat and head out into the community.