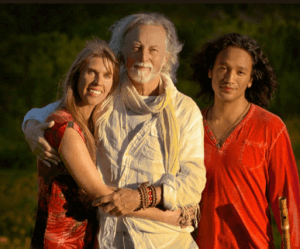 Flame carriers of a 5,000 year old tradition, Deva Premal and Miten are at the forefront of the burgeoning world-wide chant phenomenon.

They are one of the major contributors to the soundtrack of just about every 21st century alternative healing modality, from rehab/detox/stress management clinics to yoga studios, spas and meditation centres, shamanic gatherings and ceremonies in the depths of the Amazon, and throughout the world.

Merging ancient mantras of India and Tibet with contemporary musical settings, their debut album The Essence introduced a unique musical genre. The album rocked to the top of World and New Age charts where it still remains. (Deva Premal: The Essence – 1999)

Since the release of The Essence, Deva and Miten have tapped into an apparently unending stream of uplifting and inspirational music, with over 17 albums released, and sales exceeding one million.

They grace festivals, concert halls, rock venues and cathedrals around the planet.

Their ‘fans’ – people who have wandered through the darker and more foreboding landscapes of our modern existence, include not only such diverse luminaries as Cher (who recorded and performed their version of the Gayatri Mantra) and HH Dalai Lama, life coach and motivational guru Tony Robbins and author Eckhart Tolle.

What is perhaps most significant is that their mantras have also been embraced by inmates of high security prisons (Deva and Miten often take their music into prisons – most recently playing for the inmates of San Quentin).

Teachers of autistic children report great improvement in focus and attention spans when their children are exposed to the sound of Deva chanting. Brain surgeons email to report how mantras help them stay centered during operations. Journalists, actors, hospice caretakers, mid-wives, and even – or maybe, especially – Iraqi war vets and 911 firefighters have all written to express gratitude for having found solace – and support – in Deva and Miten’s mantric practice.

German-born Deva Premal is a classically trained musician who grew up chanting mantras as bedtime songs. Her mother played European medieval music on the viola da gamba, and her father, an artist and drum maker, was a devotee of Eastern spirituality, teaching himself Sanskrit while practicing daily sessions of yoga and Zen meditation.

Deva notes: “When my mother was pregnant with me, my parents prepared for the birth by chanting the Gayatri Mantra throughout the pregnancy. As I grew up we continued to chant it together regularly before sleep. I didn’t really know what I was singing… or even why! I just did it because I was told to! It wasn’t until much later that I came to appreciate the great gift my parents had given me.”

At the tender age of 11, she was introduced to the meditations of the controversial enlightened Indian mystic Osho, who gave her the name ‘Deva Premal’ (‘Divine Loving’ in Sanskrit). As a teenager, she moved away from the confines of both her classical music training and the mantra practice and began to explore her destiny in Osho’s ashram in Pune, India. She was initially attracted to the healing modalities, becoming a practitioner of reflexology, massage, shiatsu and cranio-sacral therapy.

It was there that she met Miten. “Although I was just 20 years old and Miten was 42, our hearts immediately connected. He was the coordinator of the ashram music and when he sang, he opened the congregation to an instantaneous connection to the Master’s loving energy. He wrote the most beautiful songs, many of which I knew from the ashram meditations and celebrations.”

Miten was born in London and grew up in the 60s when England was alive with the sound of a generation experimenting with American rock n’ roll, blues, and folk music.

“The Beatles, the Stones, The Kinks, The Animals, Van Morrison, Eric Clapton – it was a heady mix for a new generation,” Miten recalls. “Everywhere you went it was on the street. It was a time of innocence, a time when you could sense the possibility that life actually has no boundaries.”

He later went on to explore those boundaries, establishing a successful career for himself, touring with such bands as Fleetwood Mac, Lou Reed, Hall and Oates and Ry Cooder. During this time he released two well-received solo albums, one produced by The Kinks, another by noted Los Angeles producer Bones Howe. Although this period of his life was creative and exciting, spiritually he began to feel more and more unfulfilled.

“I’d reached a personal goal, so now what? I began asking myself some very fundamental questions, like: What am I doing? – Who am I anyway…? These questions led me to a quest for something more substantial than the prescribed diet of sex, drugs and rock and roll… they led me to the practice of meditation.”

His epiphany came while reading a transcript of discourses by Osho on Zen parables, (No Water No Moon). Miten was up-rooted from everything he had known and, selling his guitars, abandoning friends and family, record company, publishers and managers, he pilgrimaged to the feet of the Master, embracing a new life as a member of the ‘sangha’ (spiritual community). Finding a new approach to life, he discovered within himself, a new kind of music: “It was an amazing revelation. I wasn’t prepared for the healing power that the ashram music contained. This turned my head to what sacred music could be. What I heard was a spiritually uplifting mix of eastern and western styles, people chanting together in an ecstatic way that moved the heart, body and soul without being emotion-based or sexually exciting. I became hooked on a meditation known as ‘Sufi Dance’ and never missed an opportunity to participate. All this chanting, along with a life of communal integration, deeper inter-personal relating and Osho’s continual inspirational discourses, healed me from the wounds I’d been carrying.”

At Miten’s invitation, Deva joined the ashram music department and the birth of their musical and intimate partnership was born. A few years later after submerging themselves in Osho’s teachings, they left India and began sharing what they had learned from their time in the ashram, offering voice workshops and meditation camps throughout Europe.

Deva: “At that time, I was still quite shy to open my voice and sing alone, but encouraged by Miten, I became more confident and eventually discovered a natural expression. But it wasn’t until I heard the Gayatri Mantra, being chanted at a festival in England, that I fully embraced my singing voice. Knowing the text so well, I immediately re-connected with the mantra. I recognised, from my childhood, its power and the effect it had on me and I sang it as if I’d known it all my life. Which I had!”

For Deva, it felt that, at last, she had found her song. “The sacred sounds of the Sanskrit language feel like ‘mine’ – they come from a deep place inside of myself. Re-connecting with the Gayatri, I felt at home, and I watched in wonder, as the mantras and music Miten and I made began to touch more and more people.”

In a world gone crazy, Deva and Miten’s chilled out Sanskrit chants offer something of a musical balm to calm the nerves and nourish the tortured spirit.

“This is really the main reason Miten and I sing – to bathe in Ecstatic Silence. It’s our nourishment. It’s what keeps us on the road, it is what keeps us flowing creatively together. For me there is nothing more precious than having sung with an audience, ecstatic with bliss, and then entering the inner world of deep peace that the mantras offer… so deep, that with closed eyes one really feels there is ‘nobody’ there at all… all personalities gone and dissolved for an endless sacred moment into Eternity – only joy remaining…”
“The music we make is born out of a committed spiritual practice. We meditate – we investigate – and our music is a result of that experience. It’s more a case of life and death than entertainment….”