Give Back Yoga Foundation 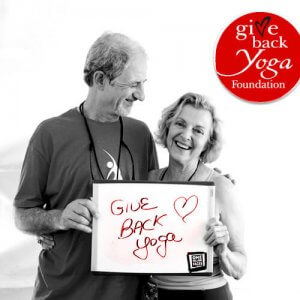 Give Back Yoga Foundation

Awaken. Transform. Give Back.

The Give Back Yoga Foundation believes in making yoga available to all those who might not otherwise have the opportunity to experience the transformational benefits of this powerful practice. As a national non profit yoga organization, we support and fund certified teachers in all traditions to offer the teachings of yoga to under-served and under-resourced socio-economic segments of the community. Through this work, we aim to inspire grassroots social change and community cooperation.

World renowned yoga teacher and author Beryl Bender Birch, co-founder of the Give Back Yoga Foundation, has been an avid student of yoga and the study of consciousness since 1971. She holds degrees in English and philosophy, has traveled extensively in India, and has taught classical yoga and Vedantic and Buddhist philosophy for four decades.

In 1980, Beryl began training yoga teachers to serve as “spiritual revolutionaries;” in 2000, she was chosen as one of just seven American women named in Yoga Journal’s “Innovators Shaping Yoga Today” issue. In 2013, her work of founding and furthering the Give Back Yoga Foundation earned her the International Association of Yoga Therapists’ Karma Yoga Award for “extraordinary selfless service in reducing suffering and elevating consciousness through yoga.”

Beryl is the director-founder of The Hard & The Soft Yoga Institute and the author of the best-selling books Power Yoga, Beyond Power Yoga, and Boomer Yoga. Her latest book, Yoga For Warriors, was released in September 2014.

The Give Back Yoga Foundation, Inc. is a registered nonprofit organization under Section 501(c)3 of the Internal Revenue Code. All donations made to Give Back Yoga are tax-deductible to the full extent permitted by law.

< Back to Resources
Tagged Consciousness