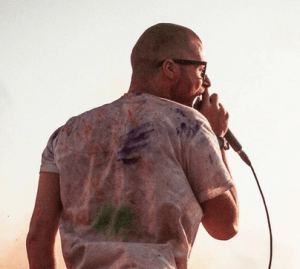 From headlining international music festivals to teaching some of the largest yoga classes in America, MC YOGI is widely becoming known as yoga’s modern day ambassador to the West.

Blending his love & knowledge of yoga culture with hip hop, reggae, and electronic music, MC YOGI is recognized as a leading voice in the emerging genre of conscious music. With three #1 World albums and hundreds of appearances each year, MC YOGI’s music is moving yoga to large, mainstream audiences.

“Perhaps no performer embodied the Wanderlust ethos more than MC YOGI, a San Franciscan who practiced yoga in Adidas shell toes, which didn’t stop him from putting his leg over his shoulder. He beatboxed over the om chant, & with the help of some stilt-walkers, led a parade from an arm-balancing class on Sunday to the stage underneath the gondolas, where he did a yogacentric hip-hop show. – New York Times